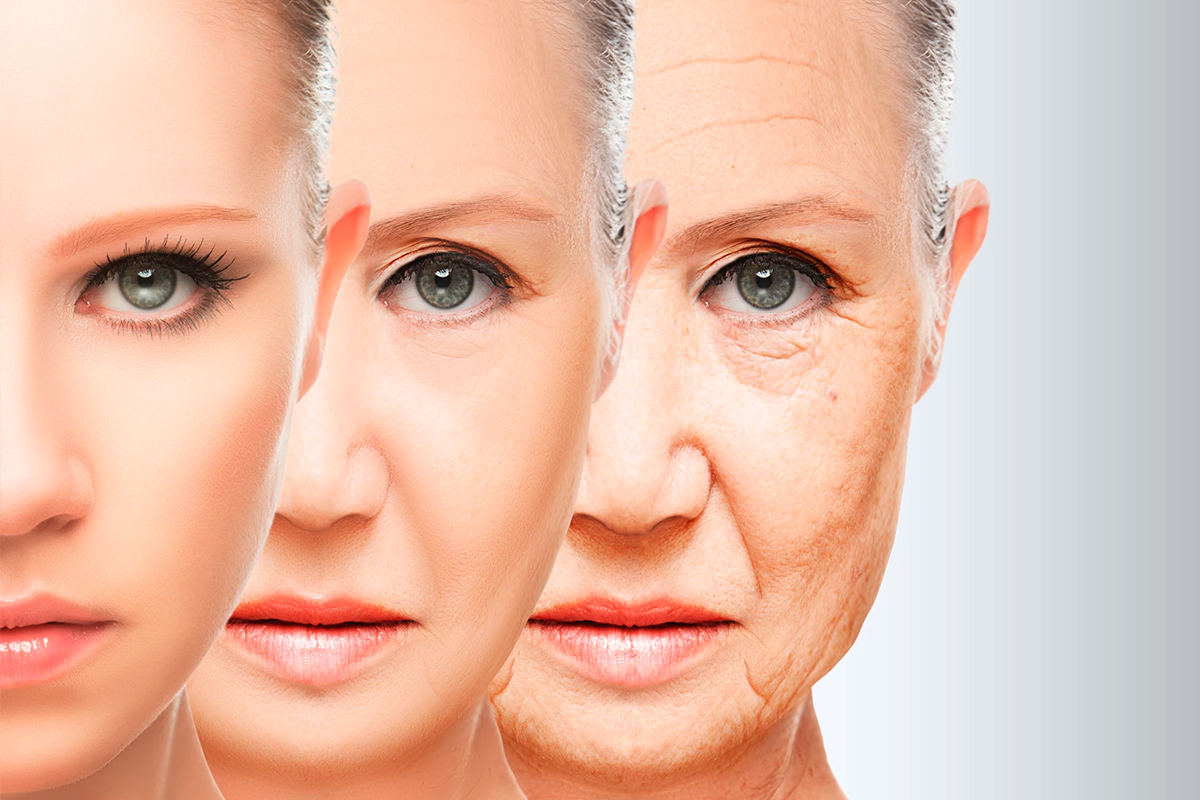 Cutaneous ageing is caused by genetic factors or Intrinsic Ageing and those caused by factors with exogenous Origins or Extrinsic aging.

INTRINSIC AGEING:  Telomeres, the specialized structures found at the ends of eukaryotic chromosomes, are now believed to plan an essential role in the intrinsic ageing process at the cellular level. Intact telomeres are integral in extending the life span of the cells. With age, telomere length shortens thereby triggering the skin ageing process. The natural, progressive shortening of telomeres may be one of the primary mechanisms of cellular ageing in skin. Telomeres and other constituents also sustain low grade oxidated damage as a result of aerobic cellular metabolism which further contributes to intrinsic ageing.

EXTRINSIC AGEING: This is largely induced by nature(sun) and by factors with clearly exogenous origin like smoking and poor nutrition. Sun exposure is the main cause of extrinsic premature cutaneous ageing. Moreover it is believed to account for 80% of facial ageing.

CHANGES IN THE EPIDERMIS:

The thickness of stratum corneum does not change very much with age but, the spinous layer of wrinkle is thinner and contains fewer keratohyalin granule.The dermal epidermal junction(DEJ) is known to be flattened with a reduced connecting surface area. Between the third and eight decades of life, the epidermal turnover rate slows down by 30%-50%.

GAG, particularly hyaluronic acids (HA) are reduced in photo aged skin. The decreased in HA levels contributes to its disassociation from collagen and elastin as well as reduced water binding and maybe involved in changes noted in ageing skin including wrinkling, altered elasticity, reduced turgidity, and diminished capacity to support the microvasculature of the skin. Aged skin has been shown to be relatively avascular.

Site specific changes, including gains and losses are known to occur in subcutaneous tissue that also influences the appearance of elderly skin. Subcutaneous fat diminishes in the face, dorsum of the hands and the shins, whereas there is an increased fat bulge around the waste in women and abdomen in men.

(B) MEDICAL INTERVENTION ( treatments with drugs and natural compounds)

Perhaps the single most cost-effective therapy that can be offered to patients is sun protection. In the form of sun avoidance, sun protective clothing and sun screens. Peak time for UV exposure is between 10.00 am to 4.00 pm and sun avoidance should be encouraged during this time.

Medical intervention in the form of certain topical and oral agents would help in delaying and or preventing extrinsic ageing. The agents that can be used for:

Various medium depth and deep chemical peels are used to improve the sun damaged textural changes and also to help promote neocollagenesis. These are simple cost effective and in office techniques which are widely used as anti-ageing rejuvenating procedures.

The two traditional ablative devices which have been used for Carbon dioxide laser (Co2) and erbium YAG Laser.

THE Co2 laser has been the gold standard for ablative re-surfacing. Results from traditional Co2 systems have dramatic for severe photo damaged skin but patients need to aware of associated down time requirements and the risk of pigmentation alteration in darker skin types.

Newer Technologies including the Erbium YAG systems, fractional lasers and plasma skin regeneration devices can treat a variety of cutaneous disorders while offering shorter recovery times and improved safety in a broader spectrum of skin types.

Non ablative lasers heat the papillary and reticular dermis, without damaging the epidermis to stimulate collagen synthesis. Compared with ablative procedures, non-ablative resurfacing provides more modest improvement but with essentially no downtime and excellent safety profile. Non ablative lasers can be divided into the following categories

The best candidates for radio frequency skin tightening include younger patients, patients with mild laxity and those with mild to moderate amounts of facial adipose.

In an attempt to delay skin damage, the causes responsible for ageing mainly elastic and collagen fiber degradation, gravity force and mimetic muscles which act on facial expressions with dynamic or hyper kinetic wrinkles lines due to their frequent muscle activation have to be targeted.

The placement of high flow, low viscosity materials for soft tissue enhancement has a long history of use in aesthetic facial alteration. The past 5- 10 years has seen the emergence of numerous new fillers of differing compositions. When combined with increasing popularity of injectable botox and other office-based procedures the role of injectable soft tissue augmentation continues to expand in the management of ageing skin.

The injectable soft tissue fillers can be divided as follows:

With age, the appearance and surface texture of skin can change dramatically as represented by the development of acrochordons (Skin tags). Cherry angiomas, seborrheic keratoses, lentigos (sun spots) and sebaceous hyperplasia’s , amongst other lesions cutaneous alterations which are removed via physical or chemical medical and surgical treatment.

It is important to have an excellent concept of the three dimensional aspect of the face and neck and how the various above mentioned treatment modalities could be used as a monotherapy or combination treatment to achieve a desirable overall effect. Remind the patient that they will continue to age, breaking down collagen as well as being subjected to the forces of gravity, It is also important to make sure that they take responsibility for skin care, including high-grade cosmeceutical or Pharmaceutical preparations known to stimulate collagen synthesis, as well as practicing excellent sun protection to protect their investment they have made in their skin.